Getting near the end... and testing is useful! 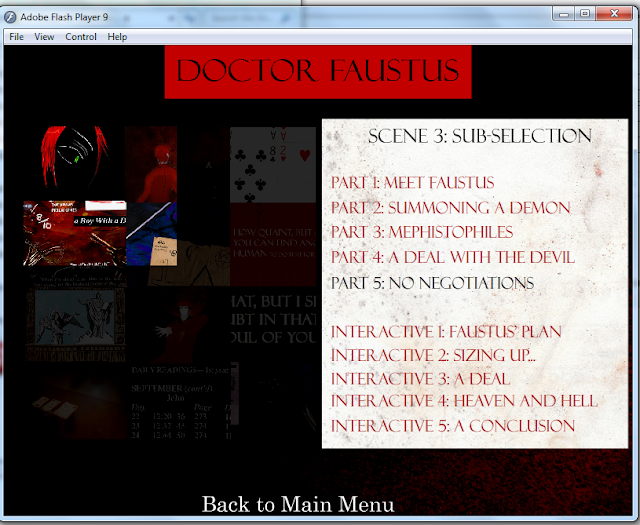 This was the thing that testers wanted the most... a sub scene selection thing.... Gosh it took a surprizingly long amount of time let me tell you... my list is now

but effective... nearly done 0_o... it's been so long and there have been so many problems... now I just can't wait to finish it now.
Posted by Unknown at 15:13 No comments:

Email ThisBlogThis!Share to TwitterShare to FacebookShare to Pinterest
Labels: build, near the end, testing

The mother of all breakthroughs....

So now... when I test the entire movie the whole thing works... all the sound is working fine, subtitles are pretty much working... one the list of things so do now we have:
1) Finializing picture timing
2) Finializing subtitles
3) Sound and Int on/off button
4)Mute button
5)Play/pause in menu

Oh... and got mail back from the BBC saying I'm in the talent pool.... and all my testing back

good day? yes I think so
Posted by Unknown at 19:40 No comments:

Email ThisBlogThis!Share to TwitterShare to FacebookShare to Pinterest
Labels: build, near the end 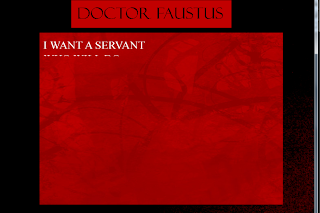 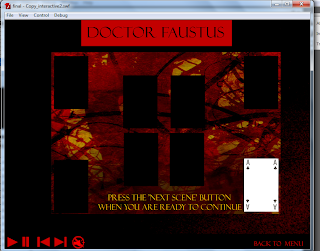 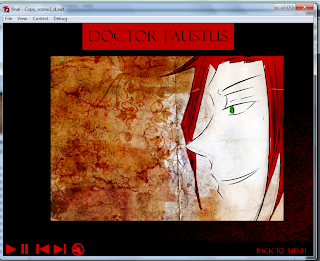 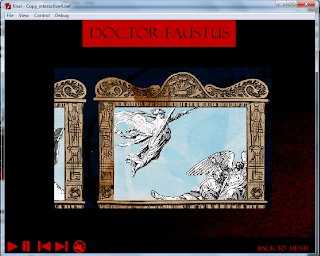 Building and cutting back

So... I've managed to animate most of the stuff now, I need to time it, but all the images are in the Flash. I've had to take time out for a while because of illness (which is sad). But things are getting better, I just need to program some buttons in and sort some sounds out. Then it's the interactive stuff.
Now about subtitles on and off and sounds on and off. I think I need to build it first... after that, I need to sort on and off things. There just hasn't been enough time to do every thing I wanted to the quality I wanted T_T. Luckily I'm getting some help with code... so things should come together soon. I'm waiting for some testing to come back still, so far people have been impressed.
Posted by Unknown at 16:56 No comments:

Kicked off the first round of testing!

The first test file has been sent off...
Can someone remind me why I built something in Flash again?
Posted by Unknown at 21:20 No comments:

Email ThisBlogThis!Share to TwitterShare to FacebookShare to Pinterest
Labels: testing

Other modules, Subtitles and Survey

Well, hello everyone! I've nearly built the demo now, some people have played it already though (thank goodness it's been eating away at my time like I don't know what!). So that will be sent off to some of the other users soon, just to see if they agree with the changes made. Another thing that has come through on testing, which I found interesting was from one of my testers, who explained that many games and interactive things he'd been on reccently had subtitles on them as standard, he explained that most puzzle based games and any games with cut scenes will include subtitles, not necessarily because it's difficult to hear or not hear, but because some people will play with the sound off, not because they can't hear. Although this is for people who don't like to read he said he doesn't like reading, but he sometimes plays games with the sound off.
Firstly, I was kind of upset with this discovery, but now I think about it, it might be better to keep the subtitles on, it does have a lot of cutscenes, and having subtitles on doesn't really detract from the animation and interactive parts as they are all inside a self contained movie section anyway. With this in mind I've decided to constantly have the subtitles on the screen, they don't detract from the main thing and sometimes it's prefered to have them on.

And finally, if anyone feels the need to do an information design survey then here it is :)
http://www.surveymonkey.com/s/MGPSW6C
Posted by Unknown at 16:25 No comments:

Got some awesome royalty free... and done build will post tomorrow
Posted by Unknown at 18:38 No comments:

About menus and stuff

So when thinking about accessibiltiy, one thing came to mind, although a lot of users wanted a pause and play and back to main menu when you pressed a button, when I thought about it, it would be much better if these things were on screen throughtout the experience, because if not, it'll break the dvdseque experience 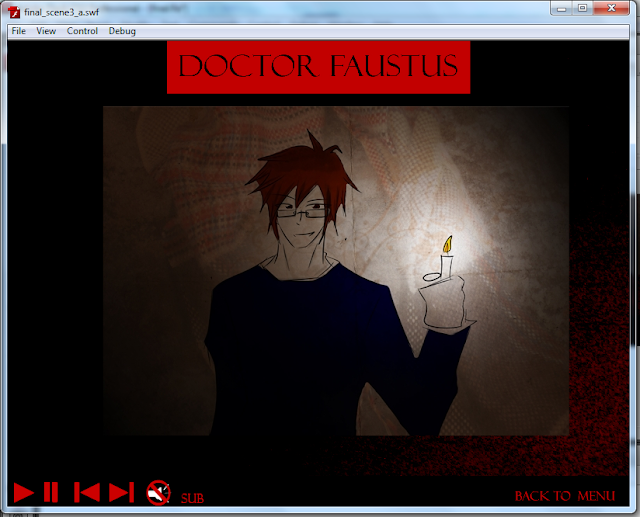 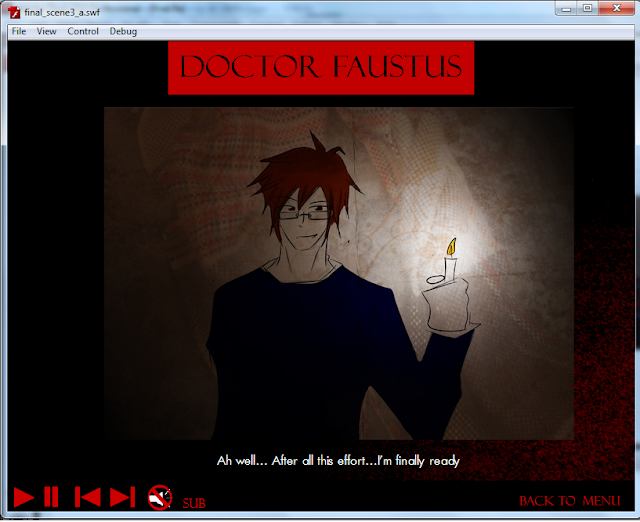 I think this looks fairly good, I'm going to build the first part and crack the testing out by the end of the week (providing all goes well on the coding front).
Posted by Unknown at 21:08 No comments: 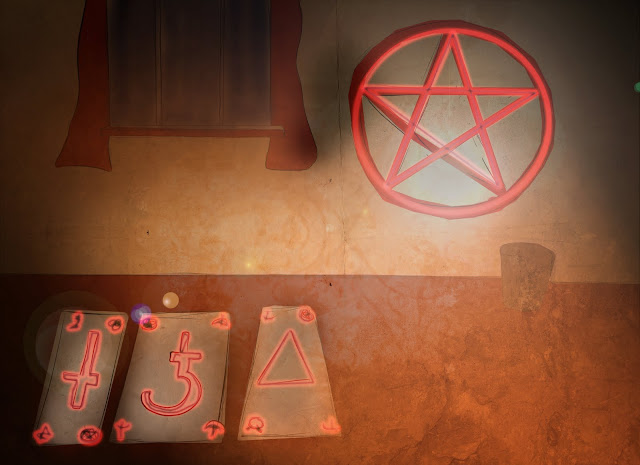 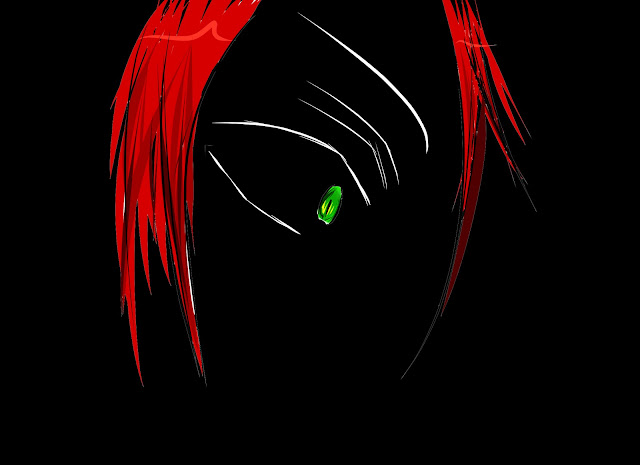 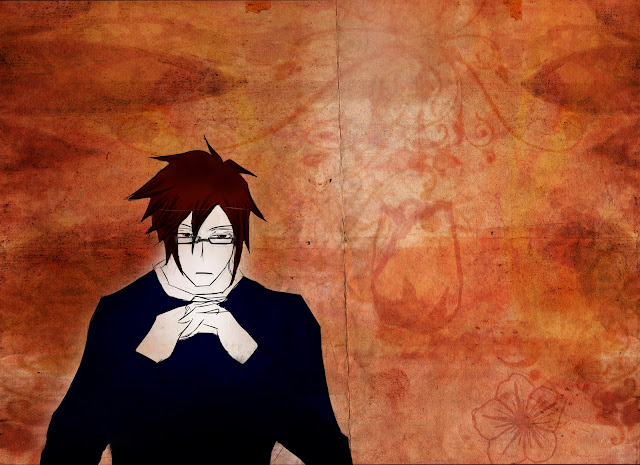 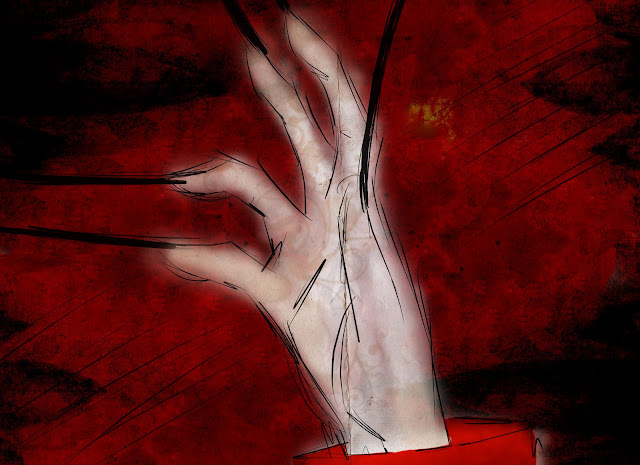 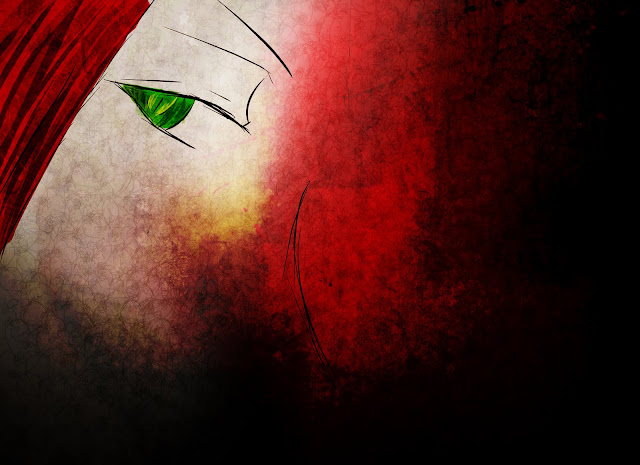 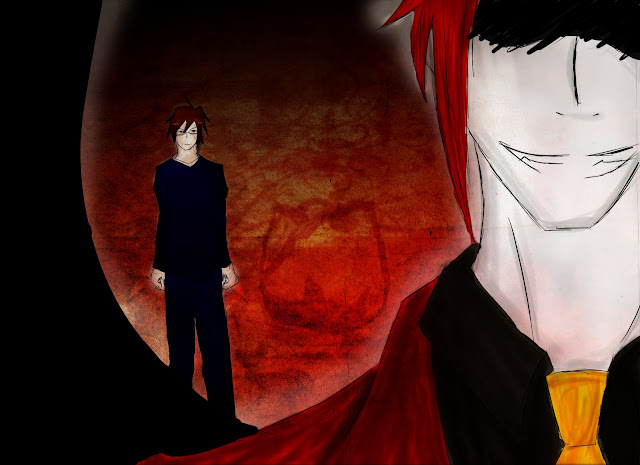 Monumental effort... these are my favourites
Posted by Unknown at 21:06 No comments: 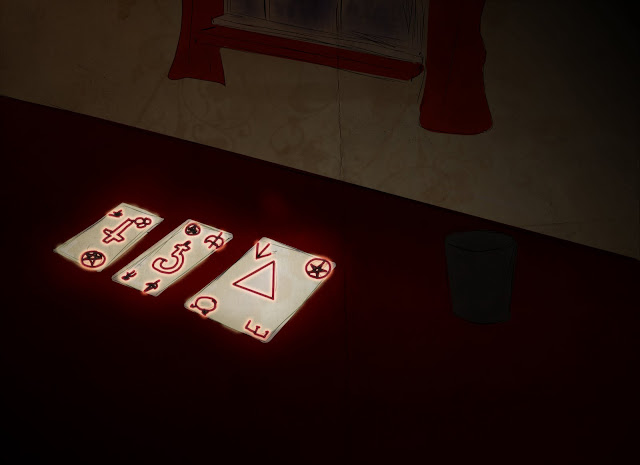 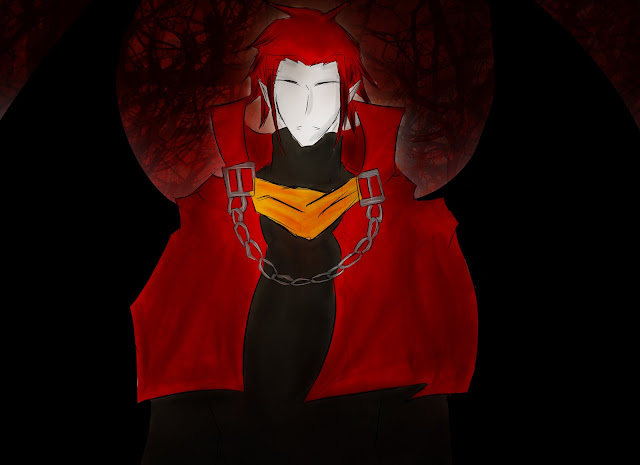 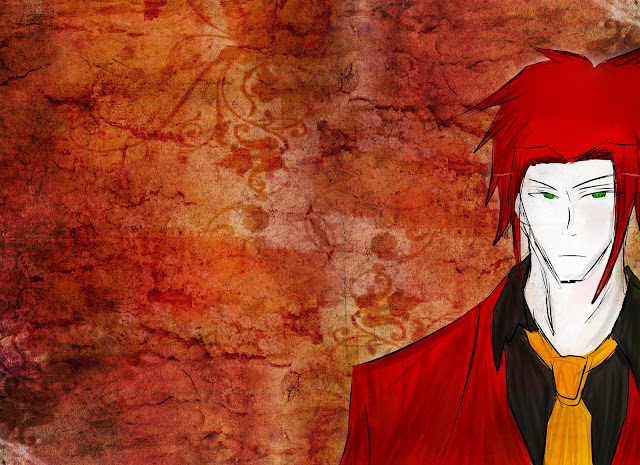 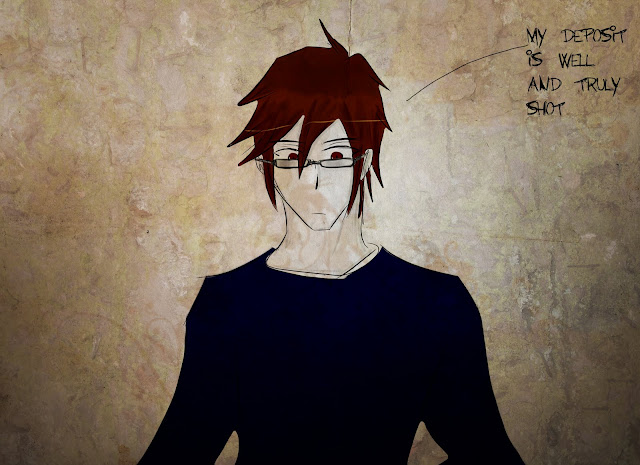 TADA
Posted by Unknown at 18:23 No comments: 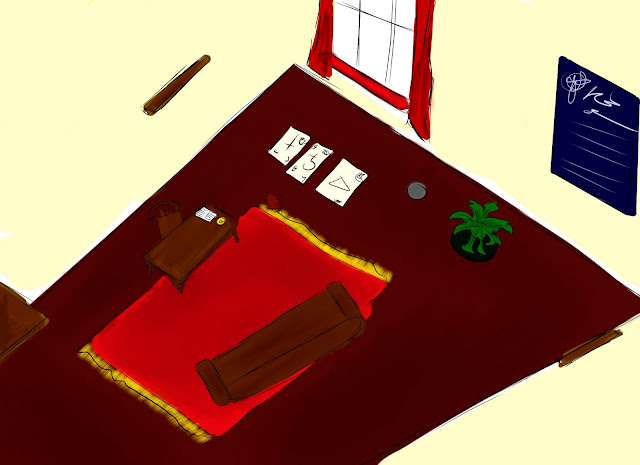 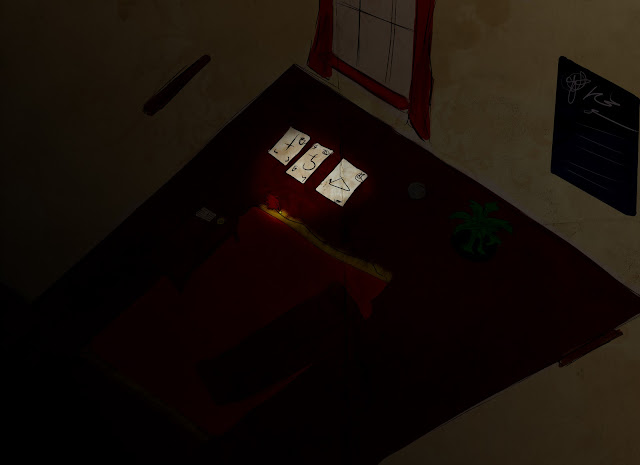 So here is a final still to have a look at, notice the darkness of the shot? It makes sense really, not all of it will be this dark of course, but for the beginning bit it's appropriate... and the colour looks fairly good, I also added the paper texture. I only have 20 left to colour and then tecture and words and then they can all go in the flash... I'm so excited!
Posted by Unknown at 00:13 No comments: 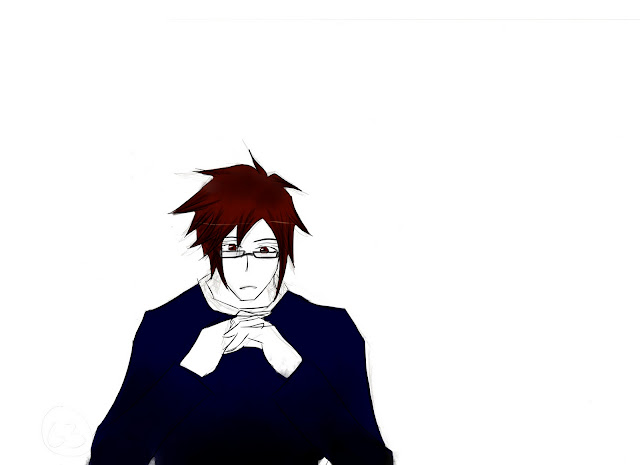 Faustus looks better in colour than I thought he would.
I'm generally quite impressed with the quality of the drawing and colouring, it's held up quite well. You'd be surprized what a lot of effort can do. I'm thinking of having a week blitzing project (In the free time that I have) I can't really do work on the others as I don't have books for them, so it makes sense that I get as much project done as I can (of course there are family considerations at this point too)
Posted by Unknown at 00:03 No comments: