Got all the reponses back HAPPY DAYS :D
Will report more tomorrow... time to bring in the new year :D
Posted by Unknown at 21:23 No comments:

Email ThisBlogThis!Share to TwitterShare to FacebookShare to Pinterest
Labels: testing 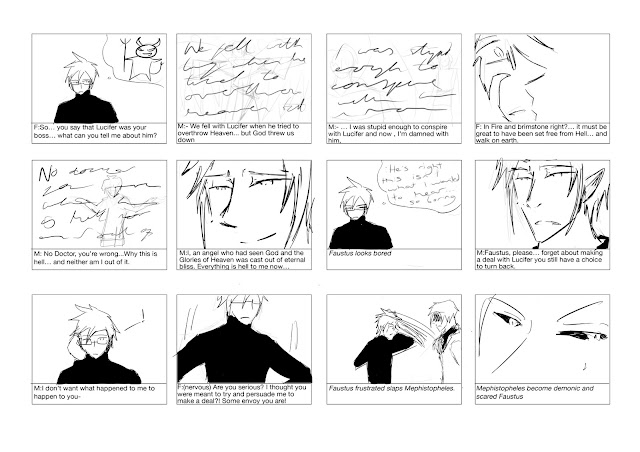 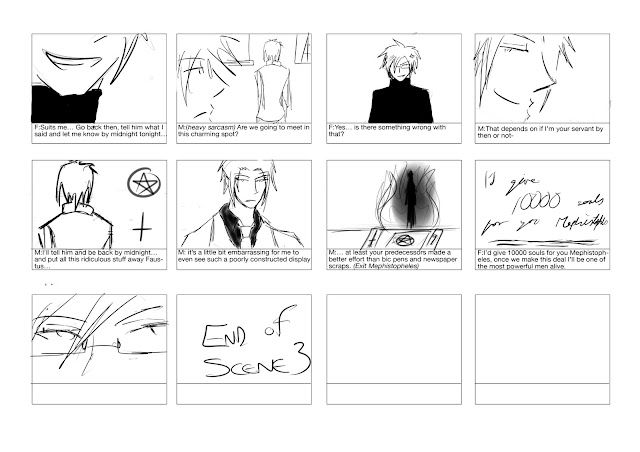 Some testing back and more semi done story boards :D

Wow! work is so tiring! I've been home a while and I've only just started getting back to working on Uni stuff -_- Finished my transcription that's good news for all :D
So other than that I've been working on Faustus story boards, obviously still rough, but probably as good as they'll get in time for hand in. Need to make a working Flash version of a bit of it HOHOHO (I don't know when that will happen but nevermind) In other news I've done all my layout and menu questionaire stuff and sent that off. I've got 3 full ones back... I'm waiting on two halves and another person to actually do the questionaire. I also have a vague idea of what these characters will look like now. I've good drawings of them on pen and paper, but haven't really scanned them in yet. Must also recruit voice actors... and change parts of the script.... Fun fun fun 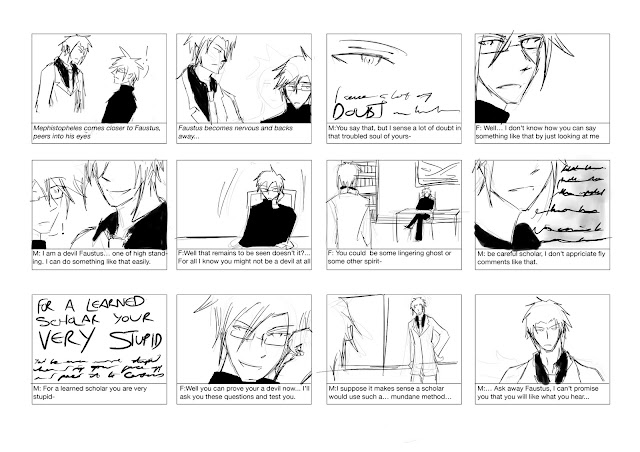 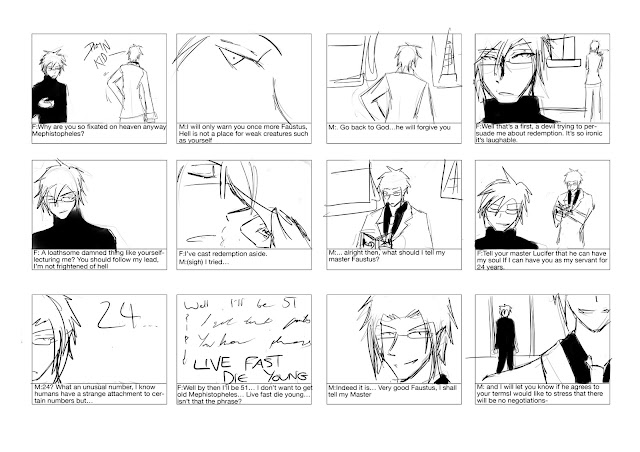 Did menu design, layout, content testing today... will hopefully get the results relatively soon
Posted by Unknown at 19:43 No comments: 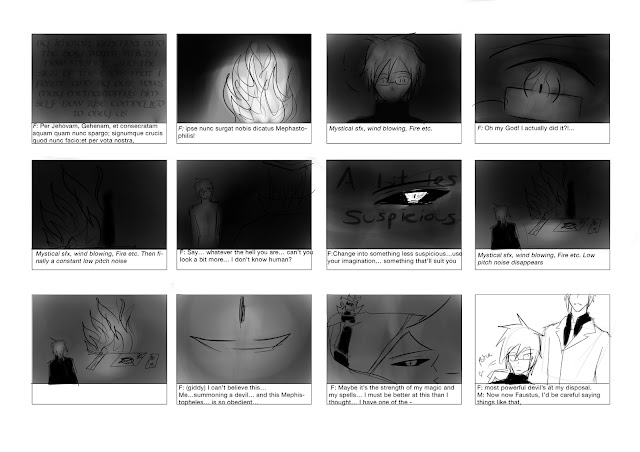 One from yesterdays batch which I actually finished today... waaaaa 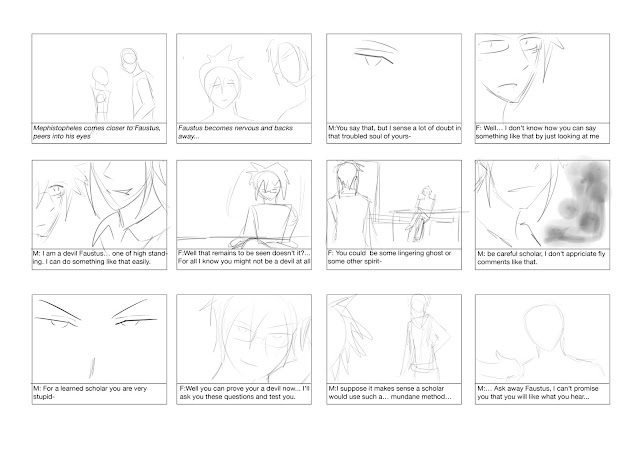 Some of the angles are subject to change as I've noticed there are a lot of the same ones... 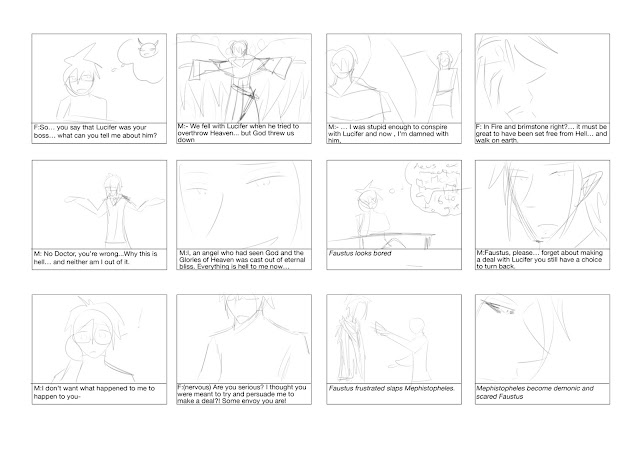 There will of course be a lot of bits inbetween the bits that are on the storyboards, but I just didn't have enough space to put them all in... things like moving from one place to another that will involve less CU and ECU, but I thought it was important to put them in in this context, because it's when dialogue occurs 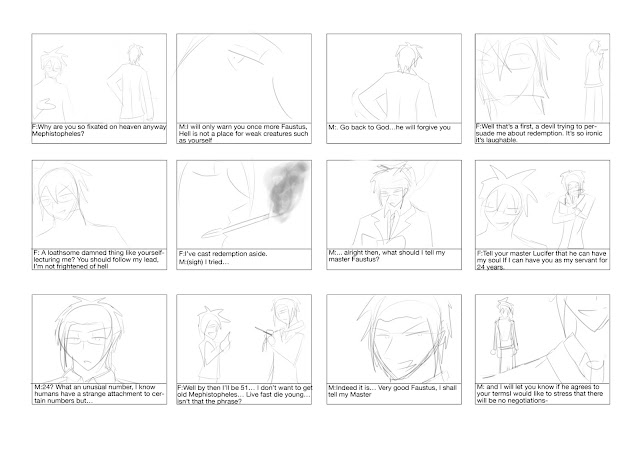 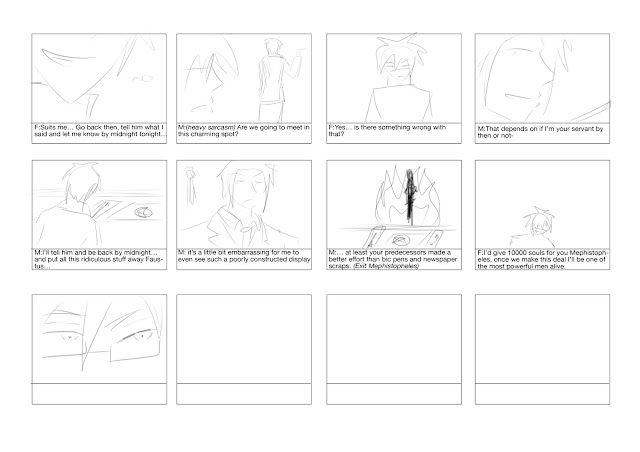 As you can tell my eyes and hands were quite dead by this point... but at least I finished it today, just as well, I'm at work tomorrow... so I am hopefully going to get some more user testing stuff done tonight that I can send out... :D
BUSY BUSY BUSY!
Posted by Unknown at 18:22 No comments: 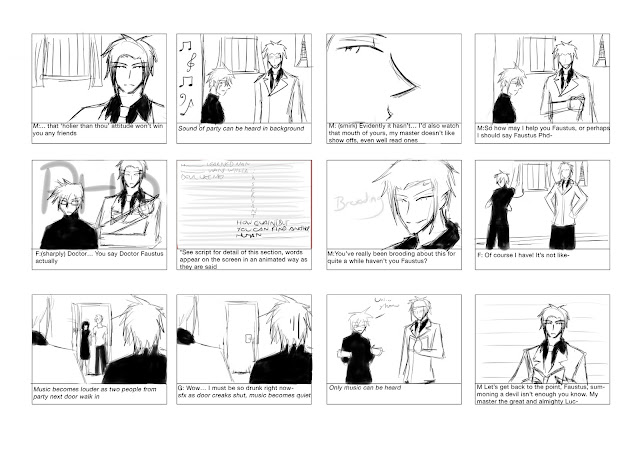 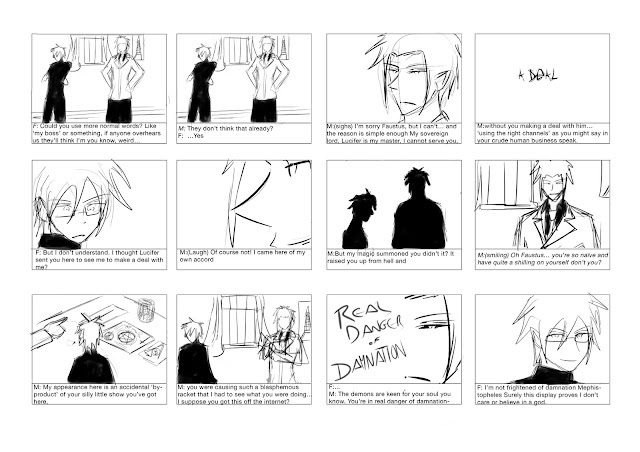 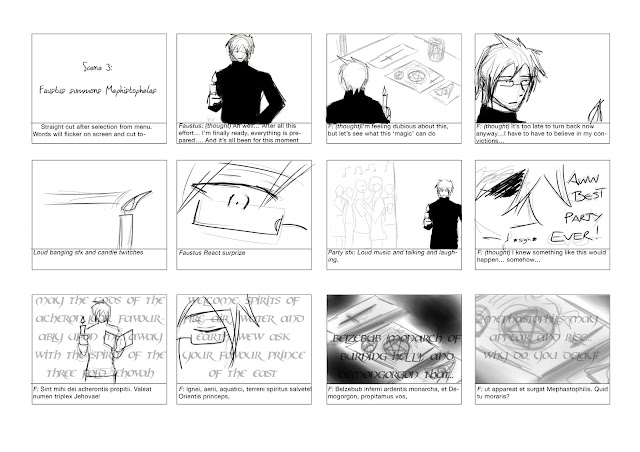 Here are some less rough story boards (I'll probably hand in something along with these as they are a little bit short on camera angles and duration of shot and the like) at least the characters are consistent now
Posted by Unknown at 23:30 No comments:

I have done Colour scheme, logo and font testing today,... AND did the FED test at ITV and Built a website...(but what it is is a secret) :D
Posted by Unknown at 23:20 No comments:

Logo designs and a colour scheme for links and such 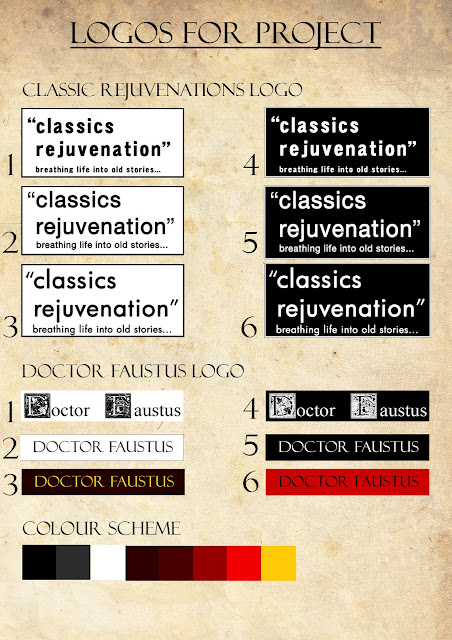 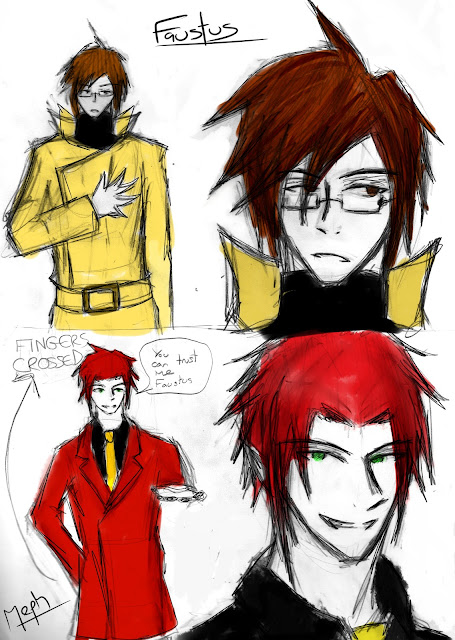 Ahhhh I start my placement at ITV tomorrow -_-... I'm a little bit nervous about it but... I'm sure it'll be okay.. in the mean time I'm hoping to finish my storyboards and have some NOT scruffy character designs (I can't make that promise though), I need to start testing stuff with my focus group anyway, so the design stuff may start coming thick and fast...
(Also I've seen a few spelling of Mephs... name so I need to find a way and stick with it)
Posted by Unknown at 14:47 No comments:

The roughest of the rough... no really...

So this is what happens when you go home for the weekend and your computer at home doesn't want to save anything... 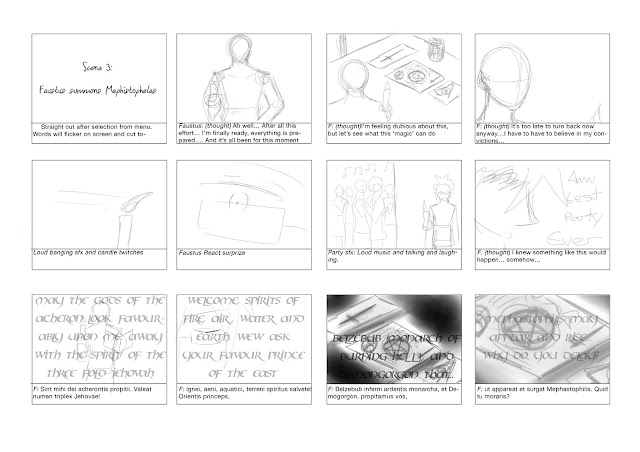 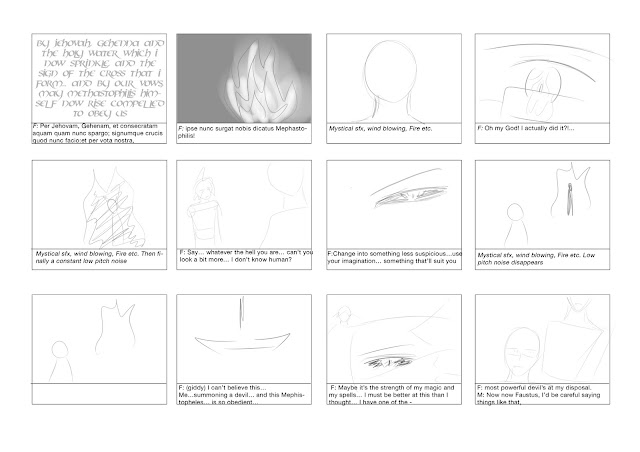 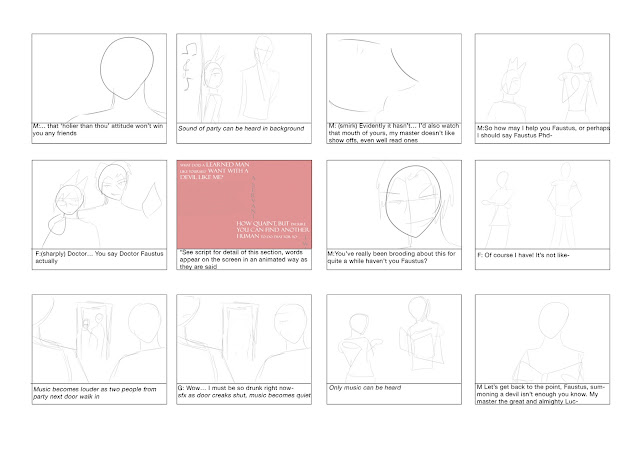 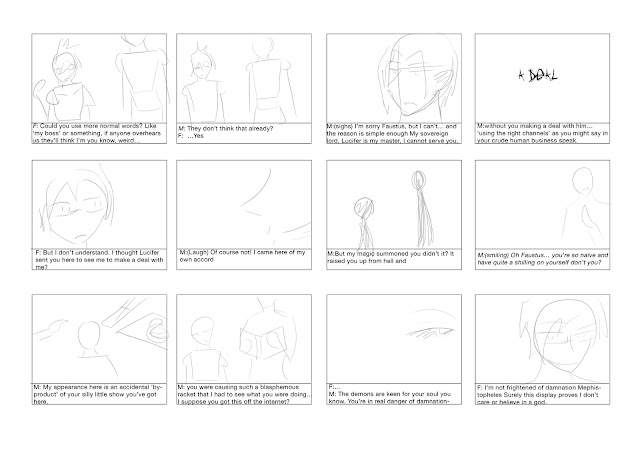 I'm a little upset, it was better than this, but no matter... I'll just go over this stuff and make it better! This is the first 6ish pages of the script and obviously, only the key changes are shown here... but when the proper version is up it will make way more sense
Posted by Unknown at 22:26 No comments:

I can say that the feedback session I had the other day went pretty well if I'm honest. General ideas were
Other than that people really seemed to like the visuals, they said that the whole style was nice, which is a relief.
So I've sent my script off to a friend of mine who has just finished her degree in screen writing (and got a first), she seemed like a good contact to call in this instance.
So I'm now starting the storyboard, which will be really really long, but hopefully, i'll be able to use some of the images again (heres hoping)
And the report went down well. :D
Posted by Unknown at 13:07 No comments: